Sitting in a hospital bed, recovering from having my nose being re-broken (a run-in with Spalding a couple of weeks back), I receive a text from George reminding me that I need to write a match report for this week. Thanks mate. So here we go…

We played Cambridge City away at the start of the season and secured a good win, despite a couple of hairy moments - namely George and Pash running into each other. This time we arrived in good time with no McDonald’s stops delaying the home game arrival. Before we got on to the pitch Adam had already started droning on about how, even though the pitch looked fine, there could be some residual frost from the weekend before and we should consider just writing off the match altogether. We also had quite a few players who looked like they hadn’t slept, having been out on the lash at various Christmas shenanigans the night before. All in all, it didn’t look like it was going to be a promising morning of hockey.

Team talk time. Unfortunately, just as we were about to start the pre-match huddle, I realised I’d left my playing shirt at home and had to frantically search for a numbered bib. What an idiot; I wasn’t even hungover! Anyway, that earned me Lemon before the game even pushed back.

We started strongly, knocking the ball around the back smoothly. It was clear that we were the more structured side, but City pushed through and got a few dangerous counterattacks. Before long they had earned a short corner and put a well struck one away. We were now frustrated but we continued to maintain good press and peppered them with several more strong attacks. Unfortunately none of these were converted by half time, as the partially inebriated team didn’t have the accuracy we needed.

One-nil down at half time, but the team talk had a pretty positive theme; keep doing the same thing and goals will come!

Second half started and Pete decided it was time to shine, realising he really needed to pull out the skills for his A Level promo video - filmed by Director Dad on the sideline. Stick in hand, Pete started elegantly ploughing through the opposition only to be fouled on the edge of the D. ‘VAR!’ shouted Joe, who was taking a break on the sideline to nurse his hangover. Unfortunately the umpires didn’t fancy the instant replay, but at least Pete now has an example of how he could nearly have scored. Subsequent persistent offensive moves at last got us two goals, one touched in by Joe from in front of the keeper after Rob had somehow smuggled the ball along a crowded backline, the other a driving run into the D and finish from a narrow angle on the right by Pete. The last five minutes showed us breaking it down into a scrappy end, with Neil making a game-saving tackle. But we finished with the all important win.

Pretty good first half to the season and now second in the league - bring on the second half of the season.

A save and a crippling, all in one 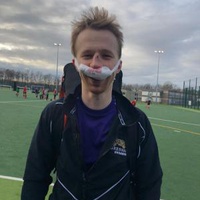