This whole saga of a derby game actually began on Thursday evening at Pay and Play, where Neil Sneade (Obi-Wan Kenobi) was heard saying to the mighty Andy T (Darth Vader), “Hey Andy, come over here a second! Right, just watch this, if you strike me down now I will become more powerful than you could possibly imagine!”

Rising to the challenge, Andy T was seen to get hold of a hockey ball and smash this into Neil’s knee, causing him to limp away into the darkness…

Two days later Neil was seen to return in the form of a sideline manager due to his injury. And yes, he proved to be even more powerful than anything he could have done on the actual pitch, juggling the swathe of subs to perfection from the sideline and providing the “best ever” team talk at half time to pull off a remarkable comeback…

Cambridge South started explosively and the first goal came in approximately forty-two seconds from a move by up-and-coming player, Peter Creed, passing and running to cut through an unprepared Nomads defence.

This woke up Nomads. South continued to apply pressure but the game switched from end to end, with an increasing threat from Nomads.

One Nomads attack down the right wing saw the ball crossed into the D. Confusion just outside the post between Connor and George in goal allowed one of the Nomads’ centre forwards to pass the ball into an open goal from a couple of yards out.

A little while later on in the first half Nomads broke through the defence into the top of the D. Keeper George made an excellent call to come out, kicking away the offensive threat. Nomads recycled down the right more quickly than he could retreat, and a shot on goal by their other centre forward beat George as he dived to cover his right post.

The first half finished two-one to Nomads.

Cambridge South regrouped in the second half and came out strongly. Very strongly indeed! I can’t remember a word of what Neil was saying as I wasn’t listening but everyone else must have been as we were like a different team. We were positive, playing with composure and putting some great passing sequences together.

While there were breaks and attacking opportunities for both teams, South had the balance of the play. The wind was strong and in the correct direction for an artillery bombardment of aerials, most of which however went to the Nomads’ right-back.

Man of the match, Jonny Camp, showed tenacity and skill to take the ball down the left into the D, shooting after getting round a few of the defenders and slotting the ball home in style to make it two-two.

A little while later, after a strong attack down the wing the ball fell to the unmarked George Anderson near the penalty spot, who smashed it home with a clinical and powerful reverse stick sweep. In the last couple of minutes of the game South put the tie to bed with a clinical team goal: a ball in from the left passed straight through all players and the D; right defensive wing back Matt Kern collected and offloaded to George Anderson, on the Nomads’ baseline ten yards from the post. Rather than collecting the ball, George deftly flicked it across the face of goal as the keeper dived to cover his left post. Jonny Camp, unmarked three or four yards in front of goal, couldn’t believe his luck and slapped in the ball to make it four-two.

After the game match teas were consumed at The Ancient Shepherds in Fen Ditton, which were superb. Lemon of the Match, Ollie, was unable to attend as he was using his electric skateboard to get around on Saturday and had no chance of getting there with his remaining battery power.

A big three points keeping the team in second place in the division and on the heels of Kettering at the top.

Tenacity paid off with two goals 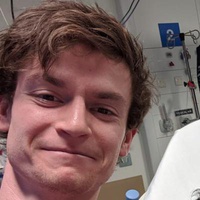 Skateboard didn't have enough battery to make it to teas