Post lockdown South have been eager to get back into hockey. Emily's Strava account has proved that she's a particularly keen bean this week, which must have been exhausting. This might however explain the series of unfortunate events that happened prior to the game. Firstly, Emily left her stick at Pay&Play on Friday – luckily South had a home game so she was able to pick it up on the day. Then 15 minutes before we were supposed to meet, the team received a message from Emily saying she had forgotten the team sheet so had to go home. To make matters worse, once she arrived at Long Road Emily realised that she had forgotten her shin pads. This was not a great start to the game, would her luck change in time for the match?

Despite the drizzle, South's spirits were high and with our many subs we were ready to run our socks off. Starting off, I realised that I had had one too many cups of tea this morning so quickly nipped off while other were playing – I thought I would do it at the beginning as I was unlikely to miss anything important.

South had started strong. Katie was smashing it will some incredible tackles, Sammy was doing some excellent passing at the back – we were looking good. St Neots had a short corner – Katie charged out full force ensuring no goal was scored. With our 5 midfielders the subs were moving quickly, after what only felt like a short time I was back off again. On the side line we were catching up then someone calls "Hey Emily, amazing goal! You smashed it". Wait what… we had been 1-0 up all this time?? Apparently in those first couple of minutes, Emily had scored a cracking goal from the top of the D – things were looking up! (Tip for my future self: be better prepared so you don't miss parts of the game).

Back on the pitch – we still had plenty of time in this half, lets score some more goals. Emily and Erin both got goals in, bringing it up to 3-0 for halftime. We had some words of wisdom from Izzy – remember we can use the wings, come to the ball, pass to Katie she's always free!

In the second half Erin had decided that one wasn't enough goals for her, so she tapped a few more in the back of the net getting herself a nice little hattrick. In all the excitement Erin either forgot who she was playing for or felt sorry for St Neots and tried to start on their side of the pitch – getting herself a few LOM votes. Quote from Laurie "Two of Erin's were both beautiful aerial strokes that wouldn't have looked out of place on a tennis court".

South were not ready to relax yet. Sophie was making some excellent space and great passes, on several occasions Kath charged down the line with the ball, Tess made countless bang on crosses from the right wing into the D. Emily was on fire, getting in another couple of goals. Despite being thrashed St Neots were fighting back. They won a couple more shorts, in one Laurie made an outstanding save on the line and pelted it away from our defending D – great job.

The rain had been on and off throughout the game, with the pitch wet I was slipping and sliding everywhere. Twice it had me on the floor, apparently with some comical sound effects. My skort was soaked, not happy.

Loopy didn't get much action in goal, but when she did – oh my! What excellent saving and full-on commitment with the dives. Ginny as per defended exceptionally, as did Emma. Despite constantly changing positions our mids did a fab job – Tara made two assists, Bethan made some great passes down the wing and Louisa did some excellent tackles.

The game ended 7-0 to South, 4 goals from Emily and 3 from Erin. What brought on this change of luck for Emily? I like to think it was me bringing my puppy to his first hockey match, but it could have been Emily's new captain band she was wearing – a gift from Secret Santa. But scrap that it wasn't luck… it was pure skill. It was not a surprise that she won player of the match – very well deserved. Post-game, Emily whipped out her team sheet she had originally forgotten. Blimey was it large, it was like one of those foil blankets you receive at the end of a marathon.

Bring on next week! 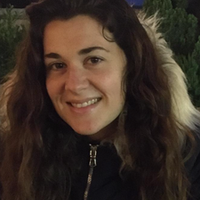