At the halfway point of the season, this final day clash was shaping up to be a deciding game in the L3s promotion battle. After a frustrating 1-0 loss at Wilby, scores needed to be settled - would it come down to goals scored at Ely? Maybe. However, the L3s decided to skip the last day dramas and instead went on a storming run and wrapped up promotion last week at Long road, hurrah. All that remained today was to enjoy a sunny day in Ely, to enjoy the game and get some goals!

Ely, however, did not appear to get the memo. As with the previous match between these sides, it was a closely fought, frustrating game. South had the better of the chances first half, Anna L and Tabs running the wings with Louisa and Em holding the middle. The forward line of Anna W, Steph, Tess and Maddy (making an impressive, rare performance upfront) kept getting into the D and finding much congestion and the Ely keeper thwarting their efforts. Hannah and Suzie held the defensive middle while Lucy, Anne and Rhian battled for control of the wings. Keeper Lydia had a couple of saves to make and we went into half time 0-0.

South knew they could take this game but the slow pitch and physical play from the opposition, alongside the energy-sapping weather, lead to a slow start to the second half. Unfortunately Ely started stronger. Captain Lucy found herself hitting the deck at least 3 times (aided by the Ely forwards....). After some sustained pressure soaked up by our defence, an overload in our D lead to them taking the lead.

With Lucy back on the pitch, calmly reminding us that plenty of time remained, we found our resilience and the teamwork that has earned us our league position. Captain Emma was everywhere in the middle, controlling the play and distributing the ball (and staying on her feet!!). Anna L was so determined to get balls into the D that she had several memorable swing-and-a-miss moments that earned her a lemon, beating Lucy for her tumbles and Rhians squirrel problems, Suzie also drove off with her boot open, but after the voting!

Towards the end of the game, South's pressure paid off with a short corner, cooly fired into the bottom corner by Maddy - earning her a POM vote. Ely weren't giving up the points without a fight and more excellent defensive work earned Hannah and Suzie POM votes. Right at the death Ely won a short corner and the straight strike was calmly stopped and cleared by Lydia, earning another POM vote there. The whistle blew and we walked off with a point earned.

POM was shared between captains Lucy and Emma, who both not only played with such determination today - but have lead the team brilliantly all season, well done and thanks ladies!

L3s finished the day with a point, hard earned, finished with second place in the league and will be finishing the night on the town. 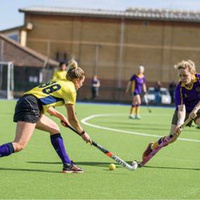 Holding the middle, the press and great linking play