M5s get an Early Christmas Present

An eerily quiet Abbey pitch greeted the early South arrivals, keen to do battle with our Cambridge cousins in what could turn out to be a critical fixture in the title race, with both teams needing a win in the fight for second place. A quick check of WhatsApp revealed no weather-related cancellation and soon the opposition started to arrive, perhaps less keen than us to face the challenge!

The visitors started well with the combo of Ian M, Avi, Stu, Jelley and Roland dominating the midfield and it wasn’t long before a Stu C assist found Avi on the edge of the D waiting to pounce. One-nil up; just the start we needed to put the opposition on the back foot.

South continued to press, with an unusually youthful looking forward line of John G/Paul S/Thomas G and Simon T – a late addition to the squad having been relieved from nappy changing responsibilities for the afternoon. And fortunate it turned out to be, as new dad Ta proved that he still had the goalscoring touch despite suffering from severe sleep deprivation.

Less fortunate, in the closing seconds of the first half, was Alan ‘Rock’ Radford, who took a massive blow to the kneecap from a short corner strike that appeared to be rising well above the backboard from a long way out. Normally unphased by a big hit to the lower leg, this one sent the mighty Rock crashing to the ground in agony. Team docs, Creed and Marshman, immediately suspected a fractured kneecap which Addenbrookes A&E later confirmed. The visitors survived the resulting short corner and cleared the ball to bring an eventful first half to an end.

Two-nil up at half-time; we couldn’t have asked for more. We knew that the well-drilled Nomads team wouldn’t crumble and would come out fighting hard for the points, which sure enough they did. Despite missing our key central defender, the re-configured South defence of James P, Pete J, Martin G, Howard S and keeper, Matt S-G, soaked up everything the home team could throw at us to secure a crucial win that puts us very much in contention for top spot in the league when we face leaders City of Peterborough at home early in the New Year.

Anyone could have been awarded MoM for what was an outstanding team effort, but it could only go to Alan for bravely as ever blocking everything that comes his way. Hope the knee recovers soon, Alan. We need you back in the team!

LoM was awarded to Avi for collecting more cards than some of us get for Christmas! 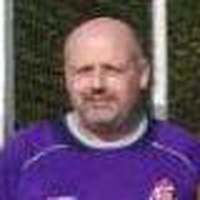 For taking one for the team…right on the kneecap!

For having a larger selection of cards than Clintons!