I’m to understand that the opposition may have been warned that this M5s team was a slightly strengthened side. Lack of availability was making it look like a rather large number of drop-downs would be needed - somewhere in the realms of eight - to put out full sides for both the M5 & M6 games.

To prevent this, out went the texts, trying to round up those keen players from the middle order who wouldn’t mind giving up a Saturday morning to play more hockey. And so I found myself last Sunday receiving a text from Andi C with the following:

Sure, I think to myself, I’m always up for more hockey. Cut to Thursday, post-Pay and Play, and down the pub. Little do I know I’m about to receive terrible news:

What’s this, the earlier game for the M5s?! Less time to get over Friday night’s excesses. But it’s not like the night can get worse, right…? Cut to me finding myself pitch-side at Long Road, wondering what I’m doing. I could be in bed, rather than here in the cold with ominous clouds building. Waiting on the rest of the team to turn up, I soon realise that I recognise another face from further up the club and, once all the M5s turn up, stand-in skipper Rob sets about sorting his team.

After a quick attempt at warming up it’s time for the friendly to start, which also seems to trigger the start of the rain. What followed was one of the wettest halves of hockey I’ve ever been party to. Apparently Dan and Rob both grabbed a goal at some point, as did the opposition. But the more vivid memories are Oli S looking like a drowned rat waiting to sub back on and JJ being passed by the opposition forward: think, super-slow motion, like he wasn’t there, only for MSG to make a great slide to save what looked like a sure goal.

Half time and a passing Sneade decided to make a point that you’d have to be crazy to play hockey, especially a friendly, in this rain. Actually what he mostly did was point at us and take photos whilst laughing uncontrollably. All the while being completely dry under his (probably golf club) umbrella and holding a steaming cup of (probably barista bean-to-cup) coffee. Those of us soaked through and cold to the bone really didn’t fully appreciate that.

The second half saw the welcome return of the sun, and with it a greater intensity. Balls getting zipped about and the midfielders getting more stretched.

As this played out South had the rub off the green, escaping a few short corner scares and earning themselves three more goals. One of which (with hindsight) was probably a bit dubious as to whether or not the ball had travelled the full five metres before being passed into the D. Sorry.

At some point some idiot in purple missed an open goal, and proceed to talk himself out of Lemon by pointing out the pitch side taunting (but nevertheless promised this match repor…)

Teas were the usual pizza at the less-usual Queen Edith, the majority being given to the opposition who had turned up in good numbers, and their youngsters had worked hard against a tough opposition and deserved the extra rewards. They also made promises for the end of season return trip. It’s not Christmas so hopefully South M5s won’t need to call in player-shortage favours for that one.

Neil did have the decency to make fun of us from within range of the water bottle I was holding ;)

Bounded up and down all game, took his goal nicely 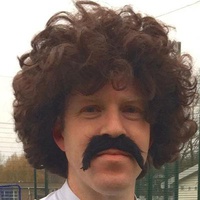