The game began earlier than planned, following a flurry of messages. Was it going to be 4:30pm? 3pm? In the end, we settled for 4pm. The next question was whether it would happen at all, with Storm Arwen coming around, but we all arrived to a cold and empty pitch on Saturday afternoon.

Warm-up had to begin from a lower than usual base temperature, thanks to freezing wind and rain. Several comments were made about keeping it vocal on the pitch to counteract the weather and with stinging fingers, we lined up for pushback. South started hard, taking the fight straight to an experienced City team. Our pace and fluid passing quickly troubled the City defence, but it was clear that handswarmingup was still very much in progress in the first 15 minutes, as almost every first touch ricocheted off sticks or was slightly miscued.

The umpires called a quick pause when they noticed subs were happening on both sides of the pitch, and the Citysideline was quick to request subbing by the rugby pitch to have the wind at their backs. Once play resumed, South started to settle into the game, and our high press turned over the ball in the form of Jim hassling their centre-back to great effect, followed by a solo reverse shot on goal just past the keeper’s feet.

More goals quickly followed, with a nice cross from Pearson, then Jacko finding Jim in space behind the keeper to put the ball home. It wasn’t long before Jim returned the favour with a slick training ground reverse cross finding Jacko free. The next flow of play built up smoothly from the middle, with passing into the far corner, followed by a driving lead into the corner from John to find Jacko in the D. He drew the keeper in and slipped it across the face of goal to Ollie in space on the back post. Surely an easy open goal? However, with frozen fingers moulded to the stick, he somehow managed to bobble the ball at snail’s pace, giving the keeper more than enough time to get across and scramble it clear.

Not long after, City’s precise passing found them in our D and attacking the goal. It all looked under control, until some fumbled passing found Matt knocking it into his own goal. City continued to look dangerous in stints, but the able back line of Dean, Pete and new signing Ali snuffed out any further attacks. Pearson put in one more goal before the half to settle the nerves.

Half-time chat was positive, and focused on making use of our three subs against an older team, with their backs to the wind and likely to struggle to reach us if we broke. South took this to heart, and with dominating midfield performances from Ethan, Steve, John, and Matt (who our whole play flowed through, according to one MoM vote), it wasn’t long before some nice triangle passing between Pearson to Ollie to Jacko on the back post found the mark again. City’s more mature players tried to put the odd shoulder in (claiming they weren’t quite as agile as they used to be), but the umpires dealt with it firmly.

As the game drew on, South came into their own. The ball was well transferred around the back, and recycled when we could. We even put our new short corner routine from training to the test, where we tried the strategy of having more than three attackers around the D. Surprisingly enough, outnumbering the defenders paid off, when Ethen was able to bundle home a rebound from the keeper. More goals followed, from two nice defections from Ethan and John, using the extra legs and pushing up from midfield. Ali even had a go, with a hefty 50-yard run getting ahead of his own pass from defence into the D.

A top performance from South, with much to be proud of. We took our chances, and it was great to see the work from training paying off. City weren’t quite so pleased with the whole performance, and declined to attend teas, leaving a victorious South side with a double-helping of pizza. More of the same passion and teamplay next week, please!

2 goals and then won the Pint off vs Jim 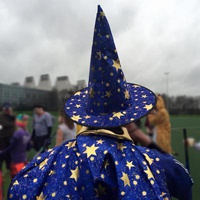