[ Players' names have been changed to hide their true identities. ]

A beat more felt than heard presaged the end of times.  Tiny specks of ice hanging in the air danced rhythmically.  As the appointed hour approached, fourteen heroes from across this great county gathered in the gloom.  Facing them across the lurid green ground stood the forces of the M5s, captained by their scheming overlord, Thalamus.  With the power of his stones behind them they hoped to erase three points from the M4s meteoric season.

The M4s launched into their pre-match warm up, only for Web Crawler to complain about his tiring swing across town to get to the game; it's hardly our fault the buildings are only two stories.

As the whistle blew the tide of play swept first one way then the other.  A number of strong breaks down the right by Arg released Tin Man and then Bulk.  Bulk leapt up (and across the field) looking for an opening but the enemy rebuffed them.

After a few minutes, the heroes camped outside the enemy stronghold.  A nice link up down the left between Doppler Range, Low Key, and Stellar Lead saw the ball deflect just wide of the far post.

It didn't take long for the M4s pressure to pay off.  An infraction gave the M4s a pentalty corner which Stellar Lead drilled just inside the left post.  1-0.

Thalamus was quick to capitalise on his chances and his troops broke forward at every opportunity.  Periods of pressure and some half chances followed.  Lightning flashed and cracked as Thurd was called upon to make a number of crucial saves.  Grout stood his defensive ground and as the ball came to him he planted his stick and bellowed "You shall not pass!" only for the ball to ricochet off his foot toward the goal.  "Wrong universe!", yelled Rant man who was uncharacteristically talkative.  "It was only a transfer!" he continued.  The defence held fast.

The M5s weren't the only ones to break.  The Wisp, Captain Ataxia, and Plucky launched Tin Man, Stellar Lead, Bulk, and Blank Window into the action time and again.  The ball scorched across the front of the enemy goal several times.  On one occasion, the ball drifted wide only for Stellar Lead to scorch across the ground and tap it in.  2-0.

The second half ebbed and flowed as much as the first half.  Blank Window and Bulk were unlucky not to see their shots convert.  The Wisp and Plucky dug deep into their reserves of youthful energy to carry the ball forward.  Captain Ataxia worked hard to cover the midfield and turn the enemies attacks into counterattacks as quickly as possible.

Despite the stakes, the battle was contested in good spirits.  Low Key accidentally drilled the ball into an enemy foot before apologising good naturedly.

Doppler Range used his magic powers to warp time and space in the corner, dispossessing the enemy.

Rant Man and Grout acted as the platform for our many attacks.

The last goal of the game came from a long corner.  Low Key pushed the ball to Tin Man on the edge of the D, who tapped it two yards inwards.  The Wisp collected expertly and thumped it home.  3-0.

The game entered the final minutes as the heroes' energy reserves ran out.  Backing into the enemy, Tin Man collapsed to the ground in agony.  "Get up and off the pitch!" commanded the umpire.  "Have a heart!" called back Tin Man; "I'm cramping!  I need new legs!".

The enemy launched their ultimate attack.  Low Key, mentally exhausted, intercepted.  Urged on by Arg, "Now might be a really good time for you to get angry", Low Key found the energy to drive forward with the ball, pursued by Thalamus himself.  Thalamus dived and stretched.  Low Key danced to the side, free and away, but as Thalamus' powerful stones hit the ground the fabric of space and time warped once again, the ball vanishing from the end of Low Key's stick.  In frustration Low Key hurled his stick at the ground shouting "My secret?  I'm always angry!".

"Hey! Careful of my schtick!" called back Bulk.

Smoke drifted across the field as the whistle blew. 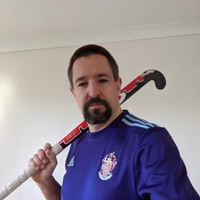 An all round dominant midfield display

For throwing his stick im such a way that it ended the game 30 seconds early.