Honours even ... over the course of two seasons

By all rights on paper the M4s should not feel troubled in the fixture, having first choice for each position and youth on their side (or what appears to be youthful, someone did suggest that both central defenders for M4s were older than Nev & Rob, not sure I believe it, maybe M5’s front pairing had immensely challenging paper rounds in their youth?) Still could experience get the better of this youthful side?

Rob sought to change things up in the shape, in order to combat the varying threats posed by M4s.

4-1-4-1 the suggestion. Before this posed a challenge to the M4’s, it first bamboozled M5’s looking to start the game with only 9 outfield players and no-one quite sure which line was missing a player. Fortunately Pete Dreuitt was on in a flash, no one knows where he’s playing anyway, so that might work to confuse the M4s further?  Let's say yes.

M4’s, as expected, started strongly challenging the lines with both passing and running in their attacking half. The M5’s held fast sticking to their marker as instructed leaving Rowland a free man to pick up anything that broke through. Foray after foray into our half was rebuffed in this manner with rock-like security, with counter attacks presented, for spritely Rob Barton to skip past the aged M4s defensive line with his trade mark pace.  Sadly not that last bit, whilst defensively strong, leaving only one player high prevented the M5’s from truly threatening the goal other than a few quick breaks and the odd long corner.

With a solid effort from all the team, the M4’s were unable to get clean shots away unchallenged or pounce on rebounds. Players for the M4s getting frustrated, teddies looked set to be propelled from prams, could wave after wave of attack from the M4s be held back? The plan appeared to be working. The game was in balance. Could a goal for the M5s turn the tide? Sadly no. The deadlock was broken by M4’s following a short corner, an un-opposed hit from Oven went straight and true into the back board, beautifully finished just inside the near post. Undeterred M5’s fought on, pushing the attacks back and as the game progressed, challenging the M4’s goal. However the M4’s grabbed a second goal just before half time with another unopposed shot from the top of the D from Tom G. The one that got away.

Half time saw discussion on hold or change the shape, with decisions made to stick for 20 minutes and twist thereafter. 2-0 was a generous score line at this point, despite the higher percentage of opposition possession the M5s stuck like limpets and were not giving up space easily. Had chances in the first half been converted the shoreline could've been even so the call was to carry on and try and get back into the match. We just needed a bit of luck or courage or something.

The second half saw the game open more for the M5's with more breaks and periods of maintained possession in the final quarter of the pitch, M5’s pushed in waves of counter attack after counter attack, battling still not to allow space for the M4's. Sadly a second short corner allowed the M4’s to tap a ball home past the effervescent George Toynton from a half clearance. Despite a 3-0 lead, elements of the M4's struggled to contain themselves first one throwing themselves to the floor claiming to be shot and shortly afterwards another player throwing his stick in desperation having been dispossessed. They were rattled and would've felt lucky the goals went their way.

A great game to play in. The M5’s fought hard and well, making one of the best teams in the league and real promotion contenders, fight for every yard. Performance-wise this was a very promising start to the second half of the season – future opponents beware!

On a day with many setting candidates - Tom, Henry, Dan, Alan were all close contenders - Roland nosed ahead. 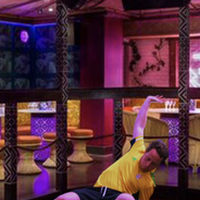 A bit harsh on George - especially as Tom missed the start due to an overrunning pub lunch - he'll be thanking his friends in the M4s. [Ed - harsh? Hmm. Not sure. Not when he took a full blooded swat at the ball, hitting it straight into the head of a teammate... This is not the advised approach for retrieving the ball off the roof of one's net]