It’s been a while since I came to the lift-share meet at Long Road but, used to the usual relaxed punctuality at CSHC, I was shocked to find that despite arriving bob-on the meet time, I was last to arrive. Most of the team sped off before I’d even parked, and this sense of urgency had clearly rubbed off on Pete, the remaining driver, as after confusion over whether Jan would join us was resolved, he drove off without taking the time to shut the boot.

It was getting hot as we arrived in the lavish grounds of Culford School. We realised that these conditions were the only time we would be glad to be on the sandy pitch rather than the clay oven-like walled garden pitch, although the slow playing surface would soon play its part in our undoing (starting with undoing the skin on Dave Monck’s knee about one minute into the game).

An injury in the ladies’ game preceding us led to a longer than usual wait, but after our warm up got underway we grouped and agreed to start the match with gusto. That we did. The first quarter we were attacking their twenty-three regularly and turning up the pressure but, despite a few opportunities, we were struggling to get into a goalscoring position in the D, and the game remained goalless. The home side began to stir and, better used to the surface, they started to intercept our weaker passes and quickly counter-attack. After being heckled with advice from the sideline, the heat and frustration led to a lemon-worthy outburst from me which the umpire quite rightly said would not be tolerated again. The combination of heat and the unfamiliar surface meant that once our hosts had survived our initial onslaught the balance was tipping their way. As they started challenging our goal Michael made a couple of fabulous saves but at the very end of the half, a foot from Jan was deemed deliberate by the umpire, and Bury were awarded a flick which found its mark.

The break gave us a chance to recharge, and we came out strong again in the second half. After some glorious triangles, with great speed and movement on and off the ball, we had a series of opportunities, with an intercepted shot from Rob falling to Pete who quickly directed into the goal for an equaliser. Unfortunately our freshness after the break didn’t last, and some effective passing from Bury, timed for the surface, led to quick counter-attacks that tore straight through to our defence. Andi, following in Jan’s footsteps, kicked a ball in the D that looked deliberate to the umpire, and Bury scored their second flick of the day. Knowing the second half was to be cut short, South pushed hard but this invited more counterattacks, and alas another goal to our opponents.

The match finished 1-3 despite some excellent tenacity and joined up passing.

"a foot from Jan was deemed deliberate by the umpire" - Oi! No it wasn't. It was deemed to be accidental, but on the goalline when the ball was going in.

A sprightly performance with great pressing runs: just what we needed. 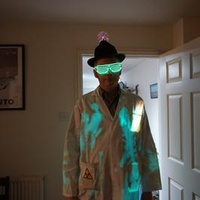 A sprightly outburst with great pressing words: just what we didn't need.