Cambridge South mustered a group of nine players to attend this tournament, where we were sixth last year. Brian from Cambridge City and two players from Felixstowe, Jez and Howard, augmented this group.

So a brilliant sunny day started at 10.30 with bacon rolls and tea on arrival, and Red Bull to cure hangovers for others after finding a sunglasses shop first!

We were in a group with Bury St Edmunds, last year’s runners-up, Waveney and Clacton. The other group comprised Bracknell, the cup holders, Felixstowe, Drifters and Braintree.

South's first game was against Clacton and this ended with a one-nil win which was more comfortable than the score indicates. The goal came from an attack down the right with John Bicknell feeding Howard, who hammered the ball home. Before this Roger Craigen had seen a shot hit the wrong side of the post and Richard Bettison also came close. Geoff Butcher, John and James Bridge controlled our midfield.

Roy Todd in goal was in charge of the defence, where Mick Beasley was sweeping with Brian, Jez and Mike Gronow in front of him. Clacton’s attack couldn’t find a way through, apart from one occasion when Roy pulled of a good save diving to his left.

Our second game immediately followed this win and saw a hard fought game against Waveney, who came well organised with a squad of fifteen players and wives and children in support. We were able to make one change from our squad of twelve and Peter Kemp came on for Mike. Although Cambridge South threatened Waveney on several occasions, it was our defence that had to work overtime and Roy pulled off several spectacular saves. Right at the end of the game, Brian pulled a muscle in his back and was not able to take any further part in the tournament. South came off the pitch pleased with a goalless draw against a team that had beaten us six-one a couple of weeks ago.

After an hour’s rest, South took to the field against Bury for the final group game and the statisticians in our midst claimed that we could lose one-nil and still qualify for the semi-finals in second place.

The game saw two well-balanced teams play a very enjoyable game with good end-to-end hockey, with all the team contributing. Halfway through the game Bury took the lead and South faced the possibility of conceding another goal to go to the minor position play-offs and an early adjournment to the all-day bar. However, South dug in and pressed forward and our efforts were rewarded when James broke Bury’s defence and passed to Richard at the top of the circle. He turned and pushed the ball to his right where Howard slipped the ball under the diving keeper who crashed into Richard. The goal looked messy but was in fact a good move.

So the game ended in a one-one draw and these two points saw CS top our group with Waveney in second place. In the other group, Felixstowe finished first with Bracknell runners up.

After a fifteen minute break for beer and sustenance, we took to the field again for our semi-final, but with no substitutes available to us some limbs were already starting to ache. The game was again a good one and ended in a goalless draw. Either there were no really memorable moments or my memory is failing! The rules stipulated that the game would be decided on sudden death penalty flicks and the drama built. Bracknell won the toss and took the first flick that Roy saved down to his right. So all the pressure was on Mick Beasley, who was volunteered – one step and a mis-struck flick…BUT the goalkeeper had moved the wrong way and the ball ended inside the post. Cambridge South were into the final.

The other semi-final also ended in a similar fashion and Waveney beat Felixstowe.

After a much-needed break of forty minutes while the play-offs for the minor places took place, South took to the field and were unlucky not to take a lead midway through the first half, when John pushed the ball across the circle to Roger who was stick tackled whilst making his shot. A short corner was awarded that another umpire might have awarded a flick for. But it was Waveney who scored shortly before half time when a shot that was going just wide of the post was deflected into the goal off a defender’s foot. At half time Waveney made a couple of substitutes from their large squad and pressed forward straight from the restart. A ten minute spell saw them score another three goals as Cambridge South ran out of steam. However the lads didn’t give up and nearly claimed a late consolation goal when Richard’s reverse flick looked destined for the top corner. The goalie got his helmet in the way and the ball glanced off it for a corner.

And there South's dream of glory ended, with a very tired squad have giving everything to the cause. And yes, the limbs have now recovered five days after the event!

A marvellous day out, great weather, all-day bar and dreams of next year with hopefully a larger squad. 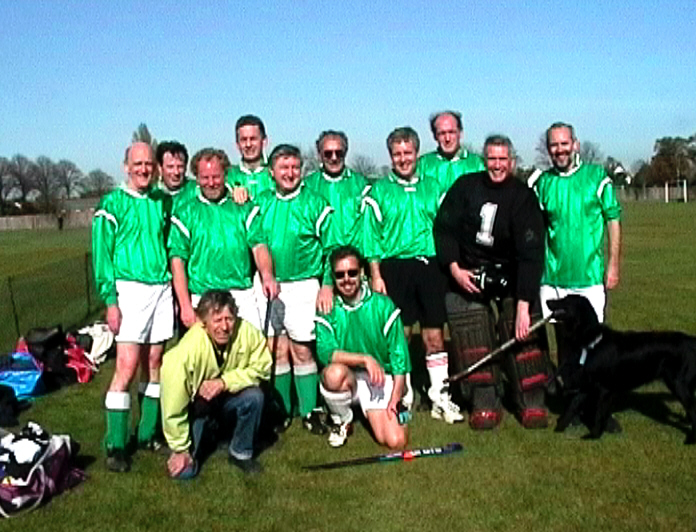