Last week, before disappearing on a work trip (no doubt another shot-downing, dwarf-tossing sales team conf in California), Love Island Rejects’ captain Joe confided that he was worried about another “Boris Lossy situation” developing while he was away. Some may remember Joe’s season as captain of the M4s, when he left his hitherto-unbeaten side in the hands of vice-captain Boris for a week only for the team to concede 4 goals in 15 minutes without reply in a derby defeat to Nomads (score in the return fixture - captained by Joe - 5-0 to South).

Well, this week Joe’s table-topping Love Islanders were up against their closest title challengers, Queens’ Greatest Hits. Joe wasn’t the only absentee and, as befits their name, the team were looking rather (de)nuded, forced to ring the changes with a roster of ringers. Despite competing gallantly and led by stand-in captain JJ (no Boris Lossy, he), without the inspired generalship of their absent leader Neil’s green machine provided too much and a 5-1 win jumps QGH to the top of the Plate table with 1 round to go.

It’s far from over though, as QGH face a tricky tie against a hot-and-cold TTPish side. 2-0 winners vs the Edge-Hogs this week, which version of Jan’s seemingly ever-changing roster will turn up for the final round? A win in the first fixture of the evening will give QGH the title, a draw or defeat will leave them anxiously awaiting the result of the late tie between the Rejects and the winners of a close 4-3 tussle with 'Stoners & Loaners this week, Stevenson’s Rockets.

On the other side of the net the Cup is also building towards a climactic frenzy. Victories for Miracle Whip and Banana Hammocks keep both teams level on points at the top but the Whip's 9-5 goalfest against St Ives 2 edges Amalia’s side above the Bananas on goals scored, after Robyn’s crew had only a 3 goal margin in a 5-2 win against St Ives 1. The title is now between these two teams as, in a masterpiece of clairvoyant scheduling, they play each other in the very last match of the competition in 2 weeks’ time. Robyn v Amalia, Sam v Morgan, Scott v Shin, Alice v um…Alice - there are giant match-ups all over the park.

While St Ives 1s’ hopes of retaining their title foundered on the bitter rocks of defeat, P-Flicks & Chill’s win against TFI Thursday (in the inverse of Love Island, apparently doing worse with the return of their captain Colin) leapt Harry’s side above both teams into 3rd in the table. Ahead by 10 points of GD from St Ives 1, surely any kind of win against St Ives 2 will see them hold off the current champions, no matter what St Ives 1 do against TFI Thursday.

No tournament next week, as it’s England v Belgium, so we’re all back in 2 weeks' time for celebrations, commiserations, big brand new silver (plated) trophies and, of course, chocolate medals for everyone. 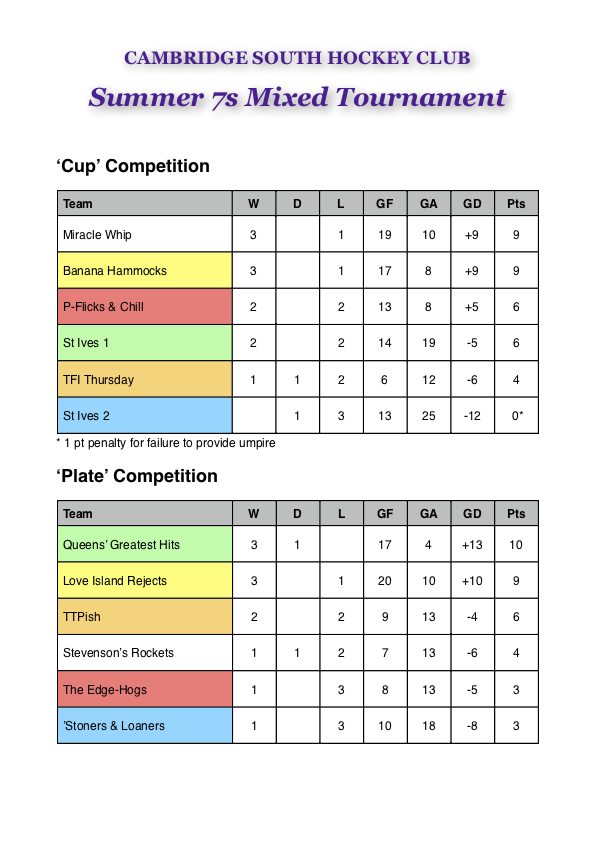