Five weeks of competition reached its climax last night with the Summer 7s Finals Night. True to form, the weather was cool and threatening, but a pre-game shower proved to be a false harbinger and in the end we were spared another evening of torrential rain.

Kicking off proceedings were the 3rd place play-off matches. In the Plate competition, Cambridge North recovered from their surprise exit to Average Joes last week to see off Southern Saints 3-0. Down the other end, McMinions raced into a 5 goal lead in the Cup play-off before a consolation for Melbourn Outiders as a hard hit directly into the D received a perfect deflection from Jan, elevating it off the deck and past the stranded Jason in goal before he even had time to react, 5-1 the final score.

The undercard concluded, it was time for the main programme. The Plate final proved to be thrillingly contested, Average Joes taking the lead near the end of the first half after a mis-kick howler from Lino in TFI Thursday's goal presented the simplest of chances. TFI came back to level with an intricately worked goal in the second period before the Joes retook the lead through an Amalia strike. TFI weren't done though, and as the final minutes ticked down captain Colin lead by example as he surged forward from defence to slot home. By this point, with the winners' trophies in sight the early summer friendly casualness had been replaced by a desperate desire to win from both teams - witness Colin's bellow on equalising.

So we had the first penalty flick contest of the tournament. The Joes won the toss and put TFI up first in the best of three. Colin duly scored before Jack stepped up and did the same. James Mathews restored TFI's lead and, with the pressure on, Lino went from zero to hero as he redeemed his earlier whoopsy with a low-down save from Joes' captain, Rob 'Reverse Stick' Barton. If Lino's reaction wasn't quite Stuart Pearce, it was certainly heartfelt. Flix stepped up to take TFI's third flick and nervelessly clinched it to send TFI into raptures and leave the Joes draped over the hoardings.

The contest for the title of overall tournament champions was an all St Ives affair though. Another tight match was still goalless at half time and for a while it looked as if both competitions would be decided with flicks. In the end though, St Ives 1s lived up to their numerical designation, finally breaking the 2s' resistance to take the lead before a second goal with a minute or so to go sealed the win and the Cup Champions' title with it.

Both teams of winning finalists then collected their trophies before all the teams received their (edible) tournament medals. 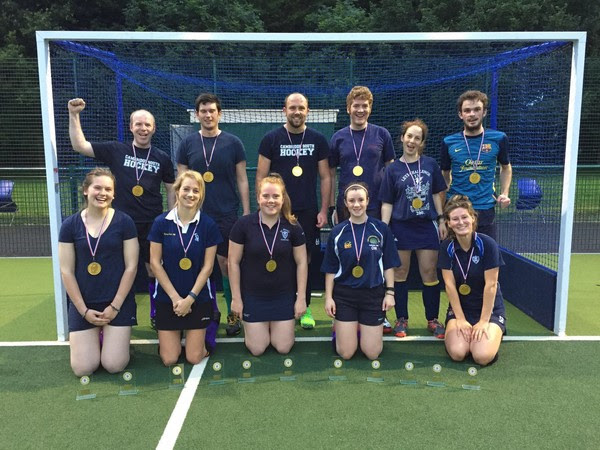