The day got off to a somewhat surprising start with Neil showing off his pilates master skills, somehow holding this position for well over ten minutes; 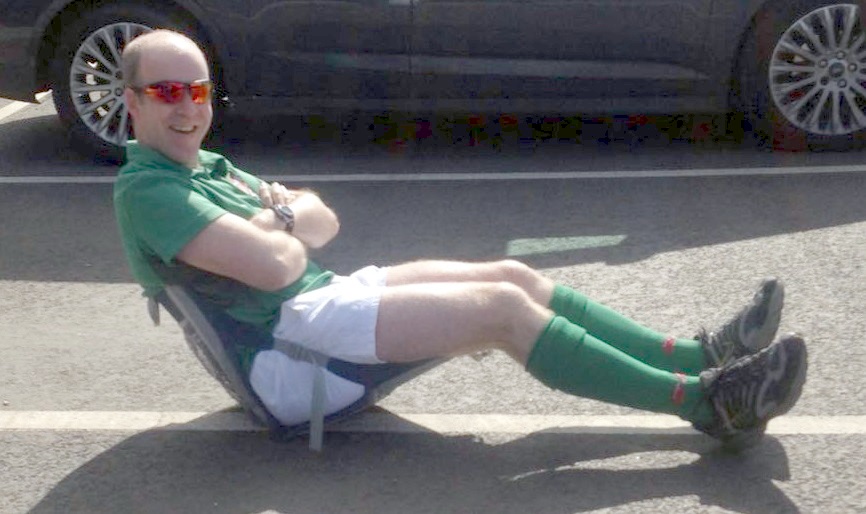 Lou W (aka Lou G – don’t ask me what the W or G stand for, as I have no idea) was also showing off (she wasn’t, she was being very modest about it), having arrived in a very nice looking BMW M3 that, in the hands of a boy racer, would be found doing the ‘barry-laps’ around Cambridge on any given Friday night. Spikey Mike was being less impressive, deciding it was acceptable to keep everyone waiting twenty minutes for his arrival following a night on the town and a bad hangover (although no facial injuries were incurred this time).

We arrived at Saffron Walden (which actually is, and always has been, Newport) and the first priority was to set up base camp. We found ourselves an excellent spot overlooking one end of the pitch, only to later discover that all our matches were to be played at the opposite end. 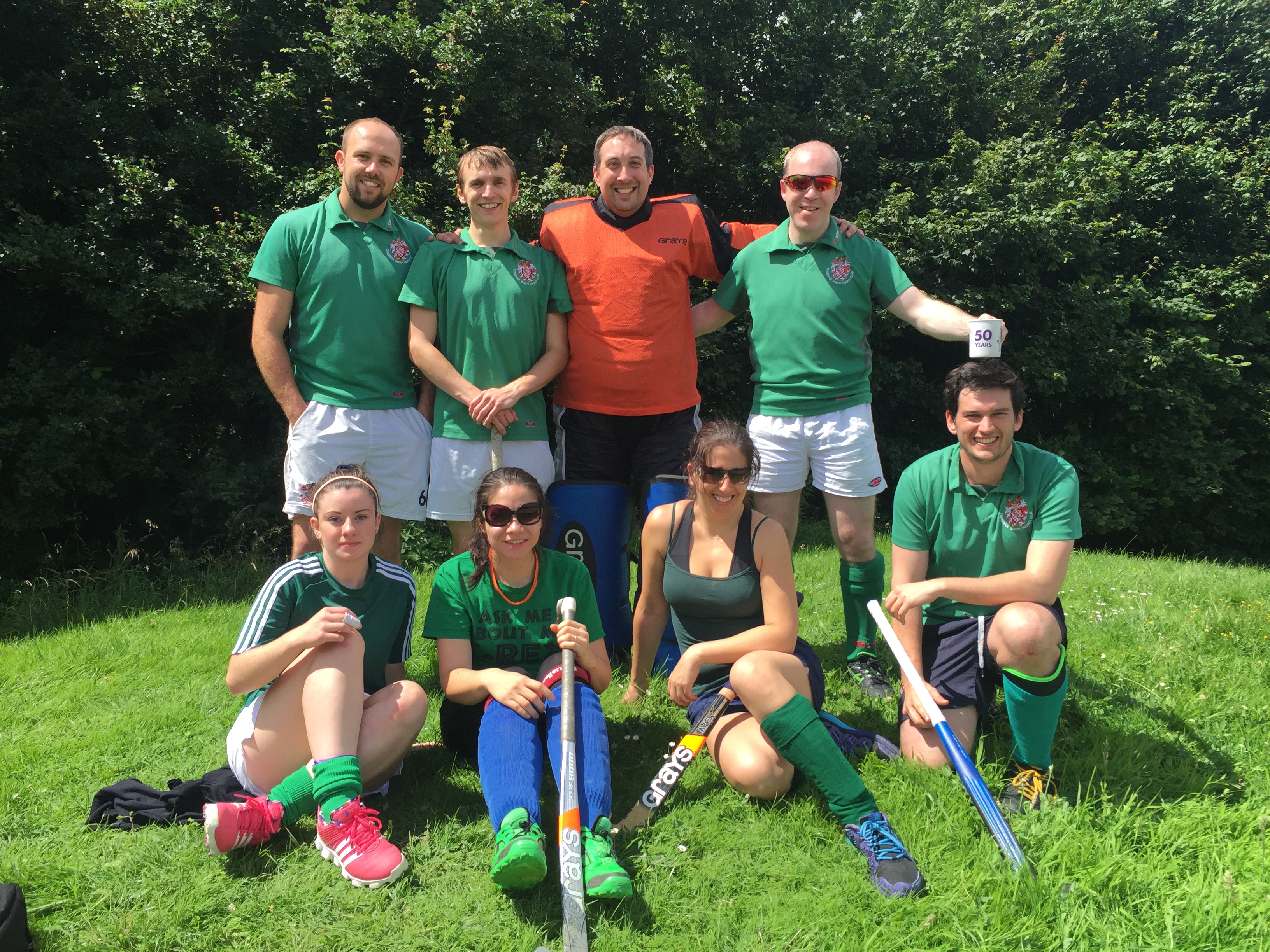 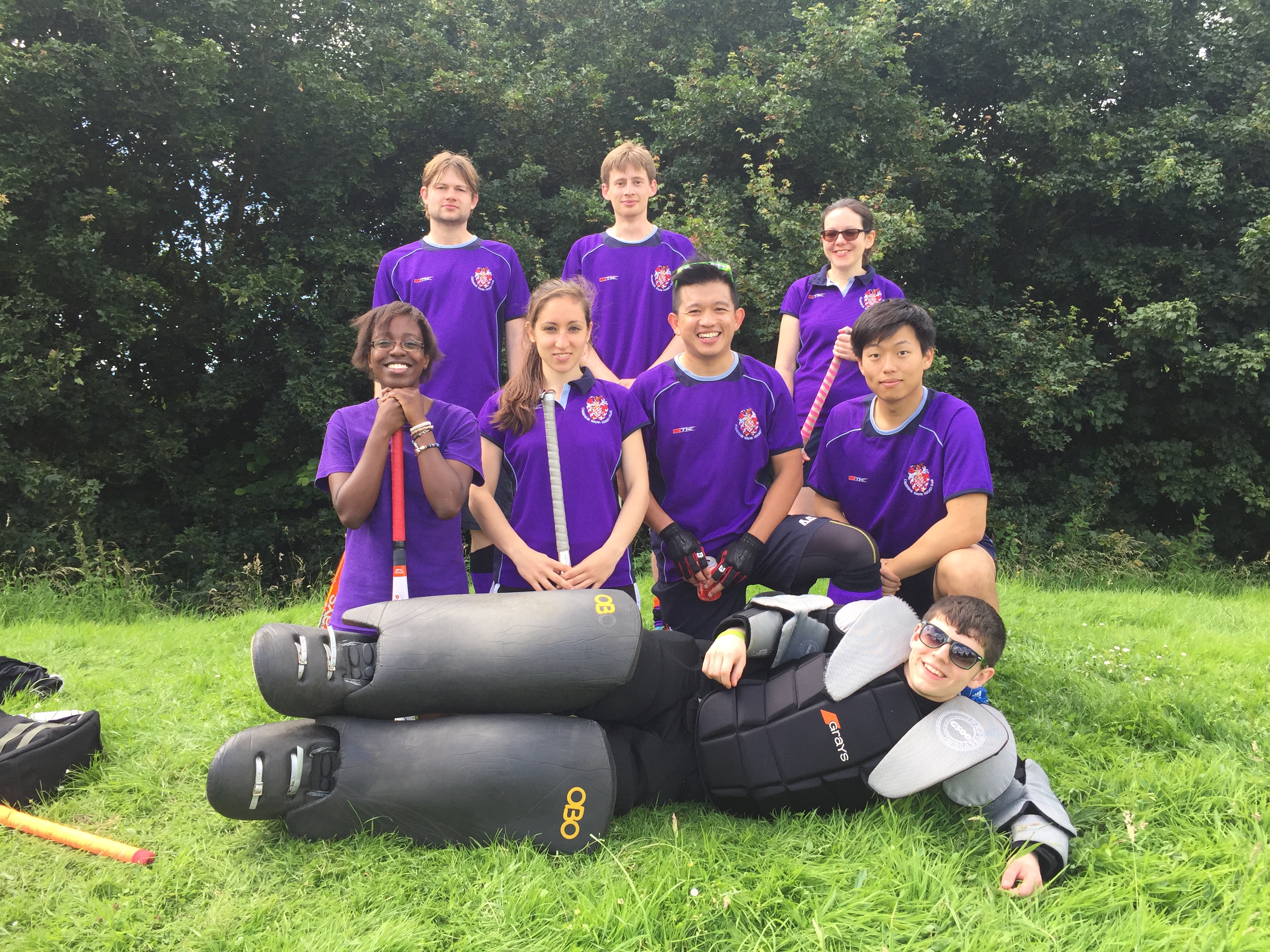 The Green team had the ever-enthusiastic Matt Saint-Gower in goal and the Purple team had Cameron, who in this photo looks strangely like some kind of Transformer (Camerontron is the best name I can come up with):

The games got started and then promptly finished, as they were only ten minutes each. We found ourselves drawing a lot of games as there was little time to actually score. However, both teams played really well and certainly put up a good fight against the other sides, in what was a very competitive tournament.

As both teams were in the same group we had to play each other, the game ending in an epic 0-0 draw (as mentioned, there was just about enough time to get a couple of shots off). This was a relief as I had aimed to select the teams to be as equal as possible.

Some off pitch incidents brought amusement for all, including Hannah’s hill rolling (see the video on our Twitter account as I have no idea how to get it on to this report) and trying to work out how Amalia’s name was pronounced (‘A-mah- lia’ or ‘A-may- lia’): eventually someone just asked Amalia who filled us in (it’s the former, or you can just call her ‘Ama’, she doesn’t mind either way). Andy ‘The Cavalry’ T arrived with a single ten minute match left (and was also subbed during the game – total game time was probably five minutes). He also decided to turn up with no purple shirt, so I leant him mine: he stood out in the sudden downpour that hit at 3pm before handing this back for washing.

The group stages consisted of two groups of six teams. The Greens finished fourth (although on level points with the teams who came second and third, separated only by goal difference) and the Purples narrowly missed out on a semi- final spot in fifth place (ahead of hosts, Saffron Walden Vets).

The Greens played Saffron Walden in the semi-final of the Plate competition. Walden took an early lead, however we had most of the possession and eventually got an equaliser. I’m proud to say that my ‘spinny thing’ actually had a positive outcome for the first time ever and got us the equaliser. The game was decided on penalty flicks, which were won by our opponents.

We hastily left after this, so I have no idea who won the competition. Thanks to everyone that took part, I think everyone had a good time.

The mixed action continues this weekend at St Ives. We are entering two teams, which is brilliant news. This is possibly the last event for this season’s mixed captains, who incidentally both can’t make this one.

I’d like to take this opportunity on behalf of both Sophie and myself to say thanks so much to everyone who’s played for the mixed teams this year, it has been great fun.