Five Thursdays, over 13 hours of hockey, 123 goals, 4 penalty shoot-outs and 100 chocolate medals either eaten, worn down the pub on Friday night or melted in your stick bag at the Saffron Walden Bailey Cup on Saturday, it’s all over for another year! Forget the summer solstice, the new start of summer begins when this tournament reaches its conclusion…

The Cup Final - Purple to Purple v S.T.I…ves (final score 2-7)
Woah! I was expecting a close game, but S.T.I…ves brought their ‘A' game and smashed this year’s debutants. That’s ten wins from ten over two tournaments for the mighty St Ives; they will be the team everyone wants to beat next time around. Robyn should be pleased with how far her team of hotshots got though. It wasn’t all doom and gloom for her last weekend, as she led almost the same squad of players (same-ish name anyway) to victory at the Saffron Walden Bailey Cup on Saturday, albeit they were playing in green and the team was therefore aptly named ‘Purple to Green’. 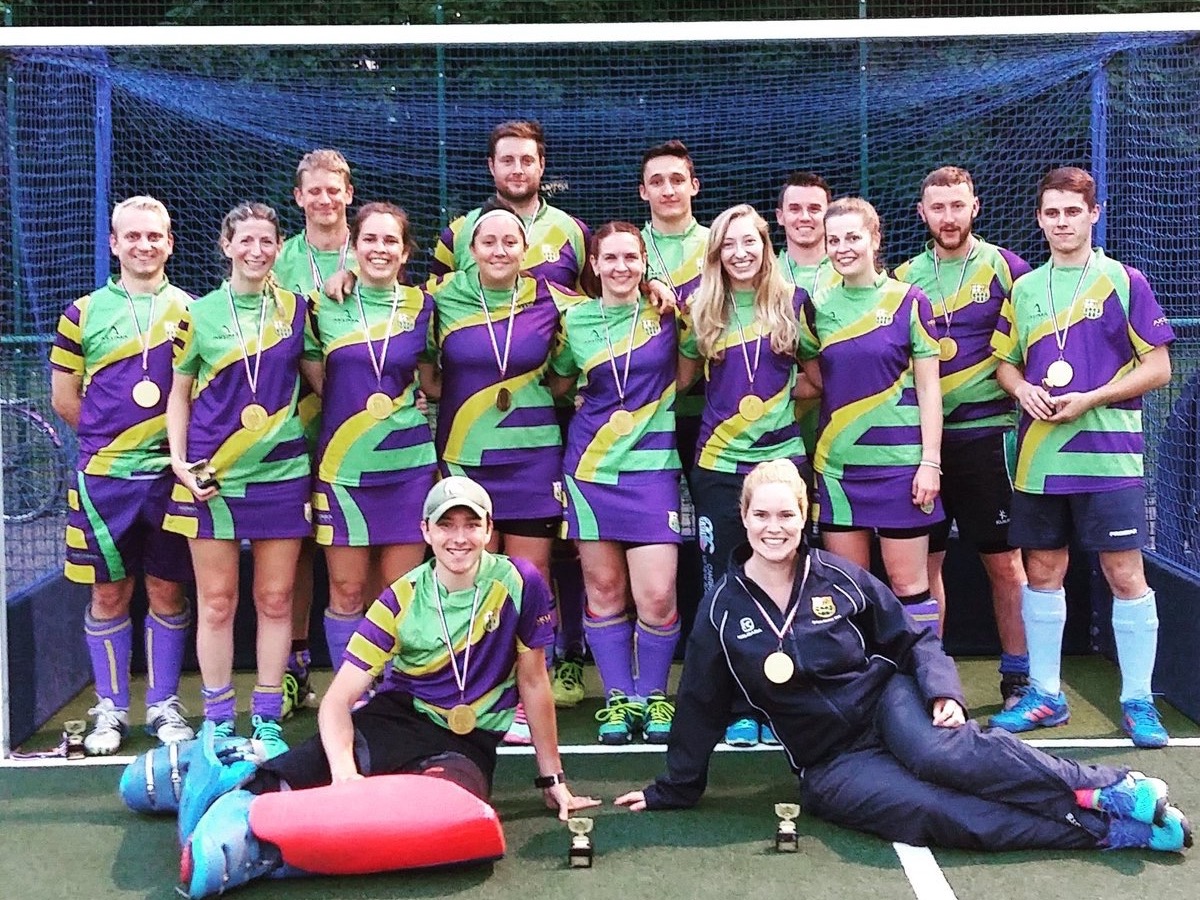 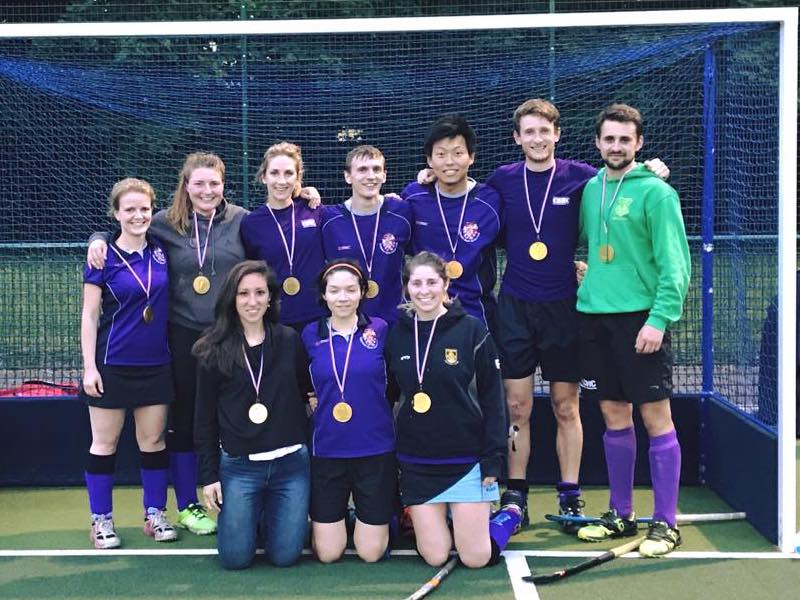 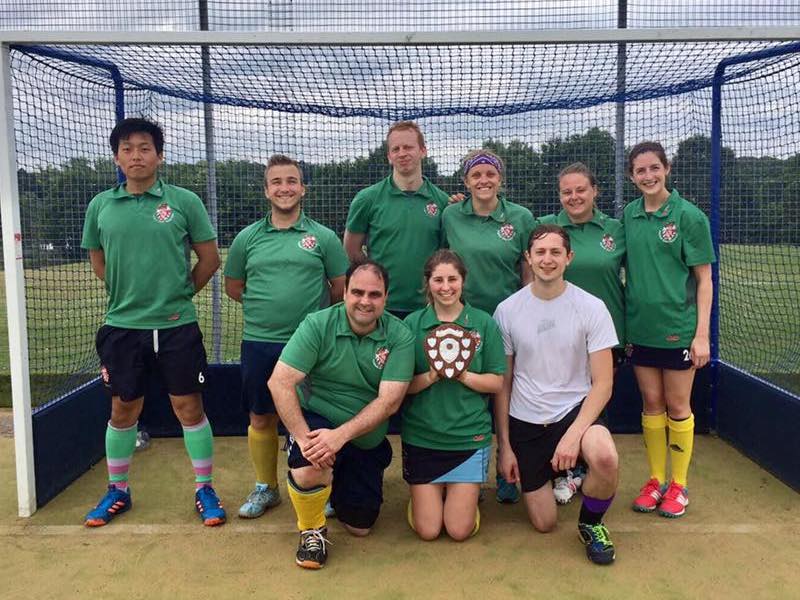 The Plate Final – SWXLS v TFI Thursday (final score 3-4)
YEEEEEEEEESSSSSSSSSSSSSS!!!!!!!! We pulled it off again!!!! A tactical masterclass (if I may say so myself). Who’d have thought a Loss, Win, Loss, Draw and Win would have been enough in any sort of competition to take home the goods?

A great final against our brand new arch-rivals, SWXLS. We gave them a taste of their own medicine with a ringer in the form of some German guy called Julius, who scored all our goals in the final (despite my specific instructions to Neil to tell him to keep a low profile at the back). The scoring went 1-0, 1-1, 1-2, 2-2, HT, 2-4, 3-4 and with about fifteen minutes to go a new phenomenon occurred that will be forever known as ‘Doing a Sneady’, where he kept the ball in his own half back left corner. He’s probably picked that up from watching some international football but the difference being those antics usually begin in injury time, not with half the game still to go!

Nev – if you want to complain about our ringer then I’m not sure who to direct you to?! The Police, perhaps?! Hang on – I AM THE POLICE!? 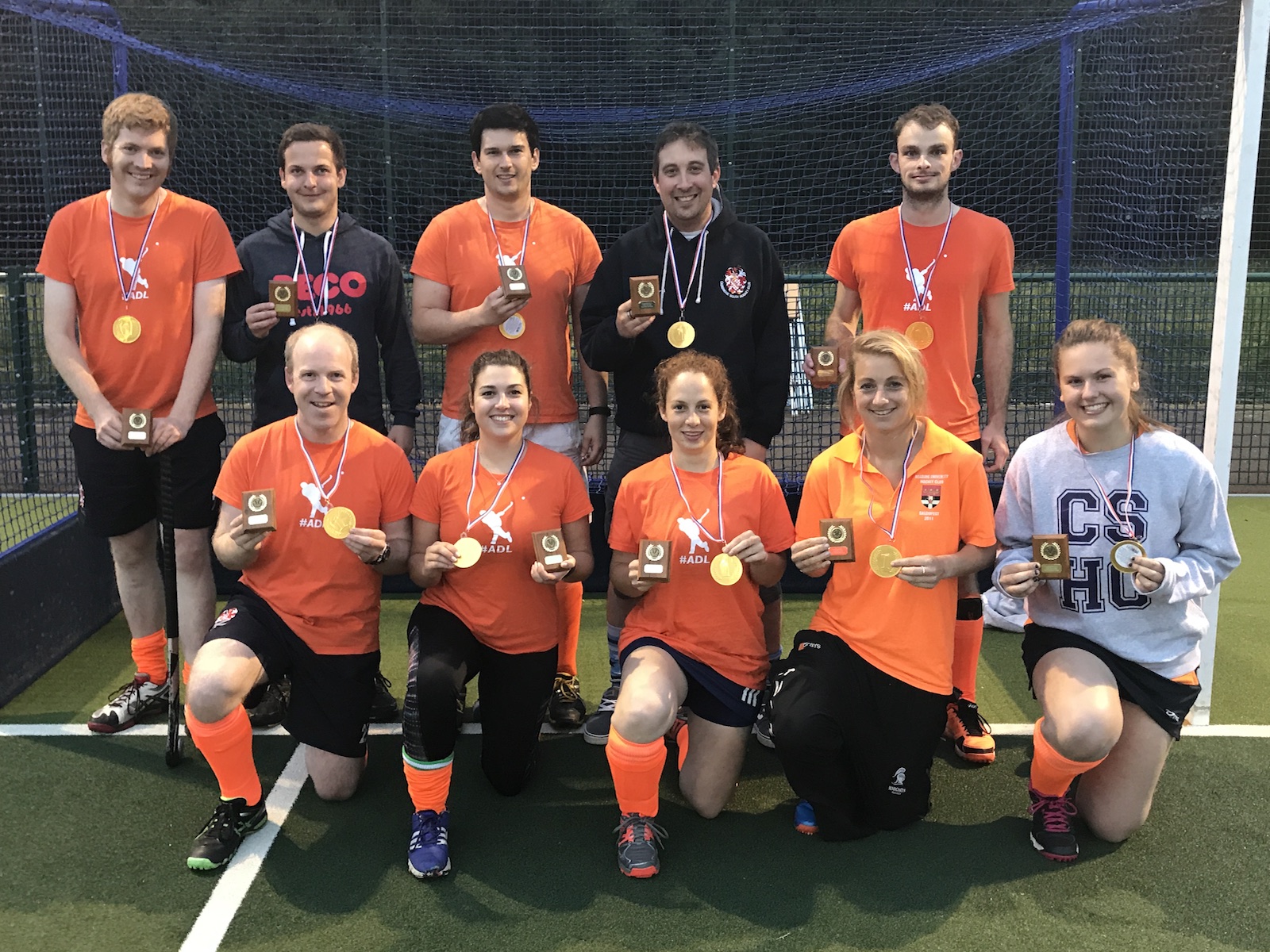 3rd Place Play off – C-Bombs and G-Strings v That Chocolate Lot (final score 6-1)
The C-Bombs would have been gutted to have missed out on the final, but it was yet another convincing win for them to come third in the competition. Congratulations to ‘Only Here for the Chocolate Medals’ who can also be classed as winners, having achieved their objective by turning up to finals night in great numbers to get their hands on the confectionary. Next year, you could just skip 5 x 40 minutes of hockey and the £100 team entry fee and go online and order your own chocolate medals. 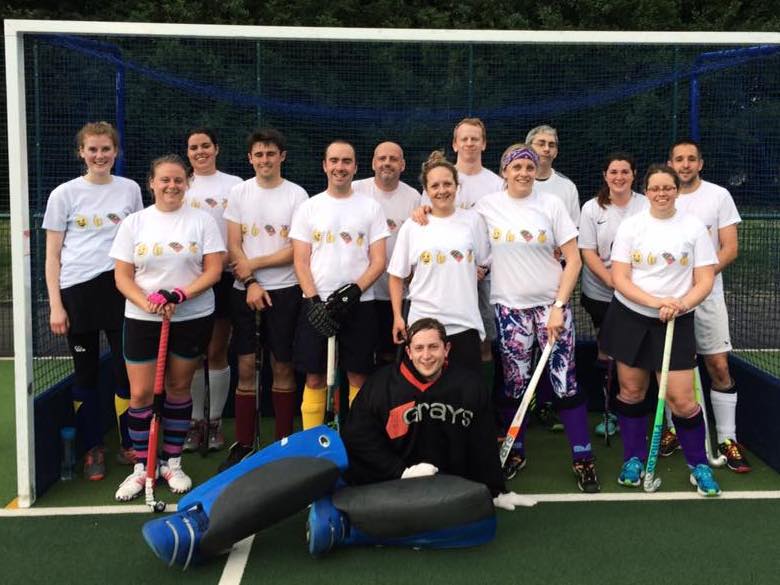 Wooden Spoon – 4Tress (that’s as short as I can get it) v Long Road Longbows (final score 2-2: pens 0-2)
What a match! Yet another score draw and a penalty shoot-out. The Fortress pulled it off to win that wooden spoon in an epic encounter. I wasn’t there and Neil was in charge of the medals and silverware so I am wondering whether there was actually a wooden spoon handed over, and can you get a wooden spoon engraved? It’s actually the most practical of awards and can be stowed away in a drawer, unlike a trophy that will just clutter up a study or fireplace, so from that perspective it is actually the best award to win, surely?? Lou – if you did get handed this please just leave it alone in the drawer so that it is in good working order for next year. 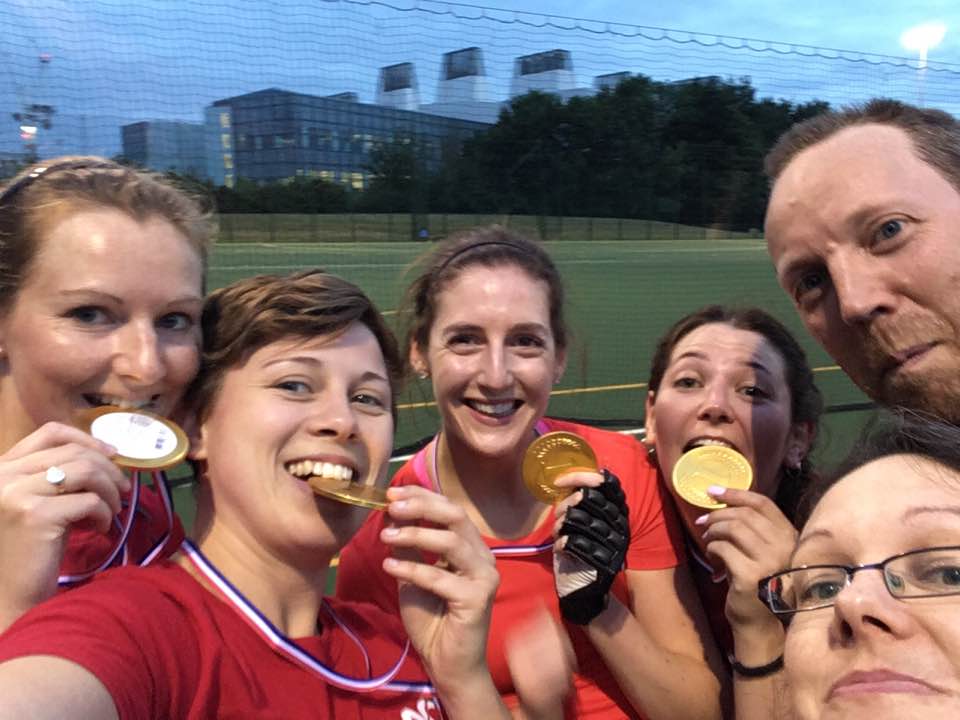 My 5 best moments of the tournament: 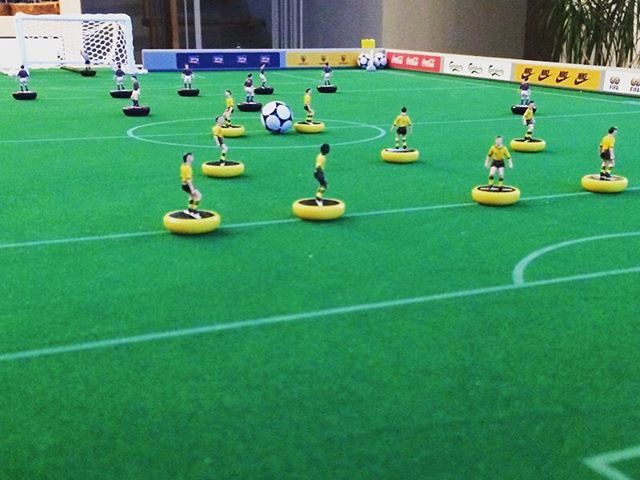 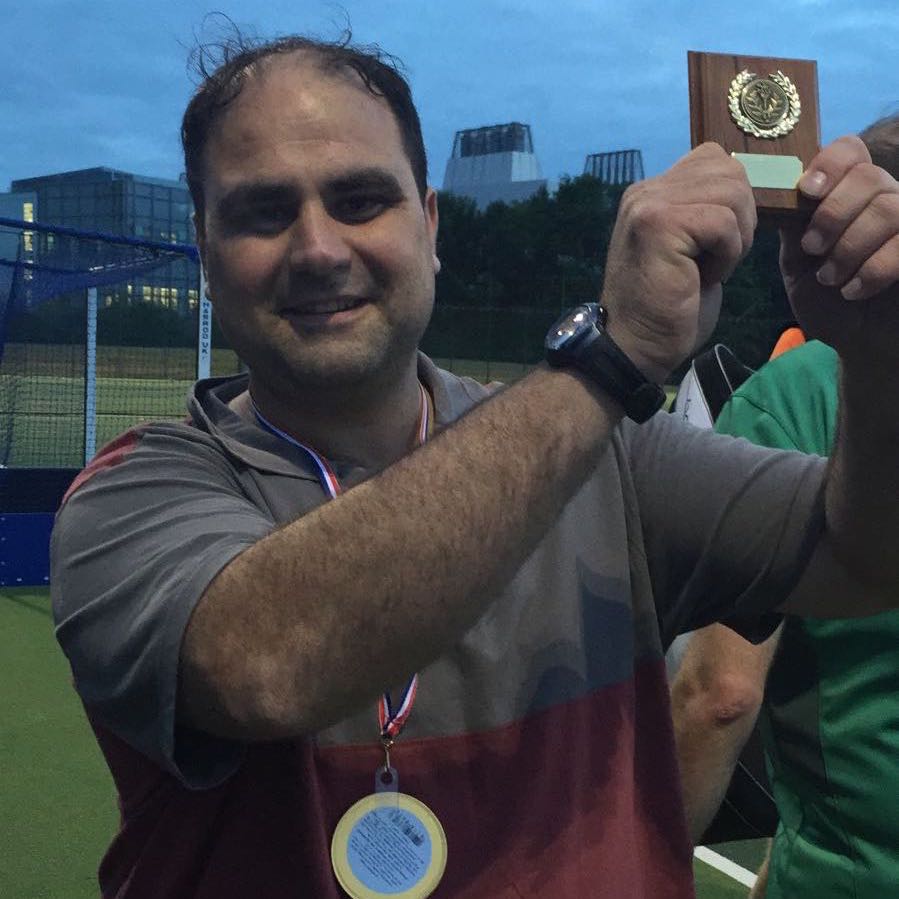 Thanks to everyone who took part! Another great tournament, and congratulations again to S.T.I…ves and your successful defence of your title.